Where do Bighorn Sheep Live?

Bighorn sheep are natural agile Rock climbers that can quickly calculate Mountain Climbing Routes and climb up steep rocky slopes with ease. Bighorn Sheep can jump many feet across wide rocky mountain crevices in these rugged habitats. Even young lambs have very little trouble calculating the best routes when climbing rocky mountain terrain. This group is ascending during the Bighorn Sheep Rut Season.

Several Bighorn Rams of Great Stature have appeared for the Rutting Season as of Today. Here is a Mix of Bighorn Sheep Bosses mixing it up with their Younger Parts During the Beginning of the Bighorn Sheep Rut.

Alberta Rocky Mountain Bighorn Sheep Rams can weigh up to 500 pounds in their Prime, during the beginning of the rutting season. As the snow falls, Bighorn Sheep seem to eat constantly, but the dry vegetation has much less nutritional value, witnessing Bighorns losing weight into Spring and early Summer. By Mid-Summer, the vegetation is think and green again, which offers Bighorns an ability to pack on the pounds in preparation for the up coming Fall/Winter Rutting or Mating season and Cold Winter months.

The first couple Bighorn Babies appear and while we hoped to see lots more, they do look to be in great condition. Ewes usually have one baby in the spring, called Lambs. Amazingly, Lambs are able to walk and climb on their first day - being born. The incredible agility of these two Lambs shows already at such a young age. Their Mothers(Ewes) eventually come up to check on them and allow them to nurse. You can also see their natural instinct to stay up and hidden is still there somewhat, but is starting to fade.

It was a Beautiful Day and these Brazen Bighorn Young decided to crank up the Fun for some Horsing Around Behavior. You can see how careful they are when aligning their horns as this playful social behavior helps them perfect many skills.

These Awesome Bighorn Ram Bosses came down for green and water, giving us an opportunity to see their amazing genetics up close in a beautiful setting. At least 3 of these Big Rams will be strong contenders for the Bighorn Sheep Rut this year.

Two Bighorn Rams separated from the herd to perform their ritual head butting battle. It almost appears that one Ram simply did not want the other one following him around during this time of the rutting season. The moments were captured over the course of a couple hours into dark. These Bighorn Sheep Rams looked as if they were going to continue their fighting much later into the night. *Thank you for your patience with us.. these moments are too rare to let the dark make us part early at the end of a great day!

Bighorn sheep are natural agile rock climbers that can climb up and down steep rocky mountain sides with ease. Bighorns can jump over 2 meters or seven feet across mountain crevices and even turn in mid-air to grab a ledge of rock. Even young lambs have incredible climbing abilities across rocky terrain. Bighorn Sheep hooves have a hard outside rim used for digging or cutting into ground, snow or ice, but the inside of the hoof is soft, sticky and spongy. Bighorns designer footwear have incredible traction with split hooves that can pinch and hold rocks, along with claws higher up on the foot that help act like brakes if sheep start to slide on loose rock or slippery surfaces.

Rockies Ram behaviors during the Bighorn Sheep Rut. Bighorn Sheep mating season shows much more aggressive Ram behavior as they court Ewes and try to block other Rams from mating. When Ewes are in estrus, Rams will detect it through the flehmen response, which immediately heightens competition among the big males. Short Fights and jostling is common with big head butting battles being more rare.

With Bighorn Sheep Ewes in estrus, Bighorn Rams are persistently pursuing them During the Rut. Mating season for Bighorn Sheep is well underway as fresh snow blankets the landscape.

The Alberta Rockies is home to some of the largest Bighorn Rams in the World. Some of the Bigger Rams continue to establish a pecking order as the Bighorn Sheep Rut escalates.

Bighorn Sheep Struttin' into the Rut

Bighorns are gathering for the rutting season. This powerful species is a favorite for us to witness. Here, in early rutting season, they are gathering with larger Rams, beginning to assert themselves among the Ewes. It may be a little early for estrus and mating, but not too early for the pecking order. These amazing mountain climbers are always so inspiring to watch. We hope they have a successful mating season.

With lots of Bighorn Sheep Rams sharing space with lots of Ewes here, the tension has become palpable. Some of the highest numbers congregated during the beginning of the Bighorn Sheep Rut we have ever seen. We are looking forward to lots of great moments among this fantastic group of incredible animals this winter!

Bighorn Sheep Boss Receives a Challenger During the Rutting Season

Baby Bighorn Sheep are called Lambs. Incredibly, newborn Rockies Bighorns can be up on their feet and nursing within as little as 15 minutes of being born. This is one of the smallest Bighorn babies we have ever seen.

Bighorns After a Heavy Snowfall

Bighorn Sheep face a lot more work after heavy snowfalls, but they are certainly up for the challenge. This steep section contains a lot of slick rock underneath the snow, which still does not seem to be much of a problem for sure-footed Bighorns.

Bighorn Sheep Lambs are quite comfortable running up and down Canada's Rockies by this time of Year. The progression of their strength and agility, like most ungulates, is quite amazing to witness in nature. 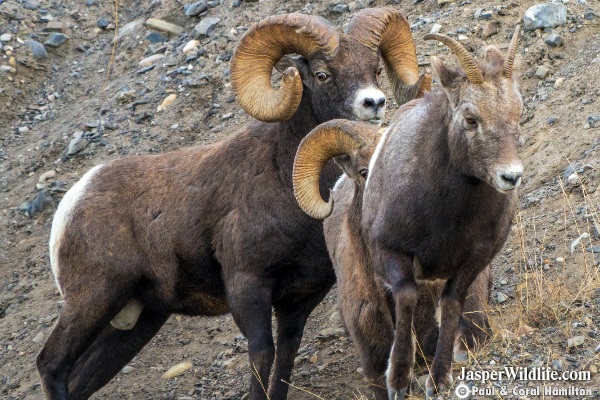 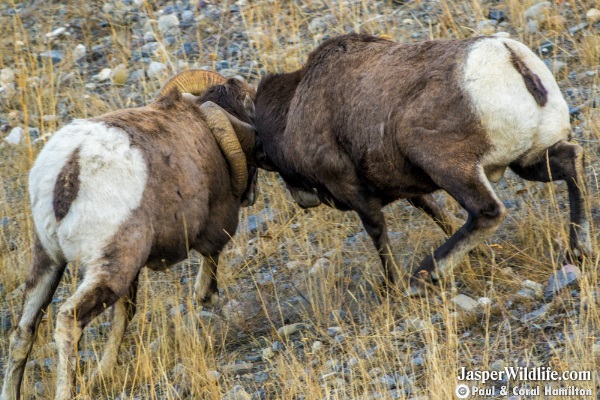 Bighorn Boss Enforcing His Status During the Sheep Rut

This Bighorn Boss enforces His status during the Sheep Rut as a couple younger Rams come down to try their luck with the Ewes. This particular area's Boss Ram would have none of it!

Bighorn Ram Teenagers Host Their Own Version of the Rut

These Bighorn Sheep Rams seem to be fired up by beautiful weather as they host their own version of the Rut. Soon, they will have shed their winter coats and begin packing on Summer weight again in hopes of reaching their genetic potential as fast as possible. You can see how they carefully align their strikes and positioning at this age.. something rarely seen, but required learning for future battles. 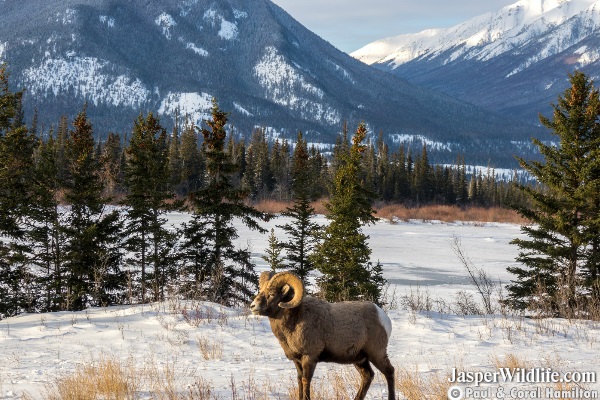 Bighorn Sheep Ram Horns can weigh as much as 31 pounds, which equals the weight of all of the rest of a Male Ram's entire body's bones. The horns of a female are much smaller and only slightly curved. The horns of a ram can tell much about him such as his age, health, and fighting history. The desert subspecies, Ovis canadensis nelsoni, is somewhat smaller and has flatter, wider-spreading horns. Certain species of sheep wool is shaved off of and used as a plush natural source for Sheepskin Boots, shoes, blankets and medical cushions. 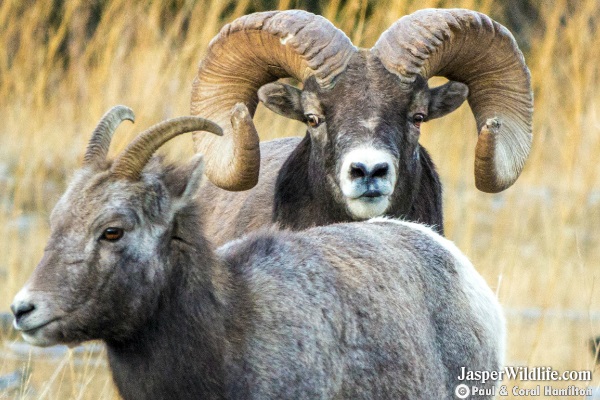 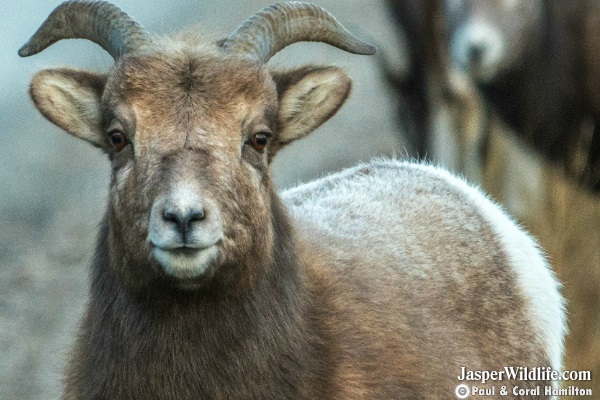