Bison or Buffalo in Alberta's Rockies 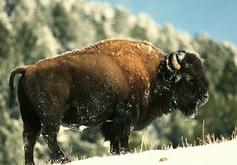 Where do Buffalo Live?

Originally, bison were found primarily in and at the fringes of open prairie. Now, however, because of their limited numbers, bison are found in many fewer habitats and their movements are very controlled. Within the national parks bison are found at all elevations.